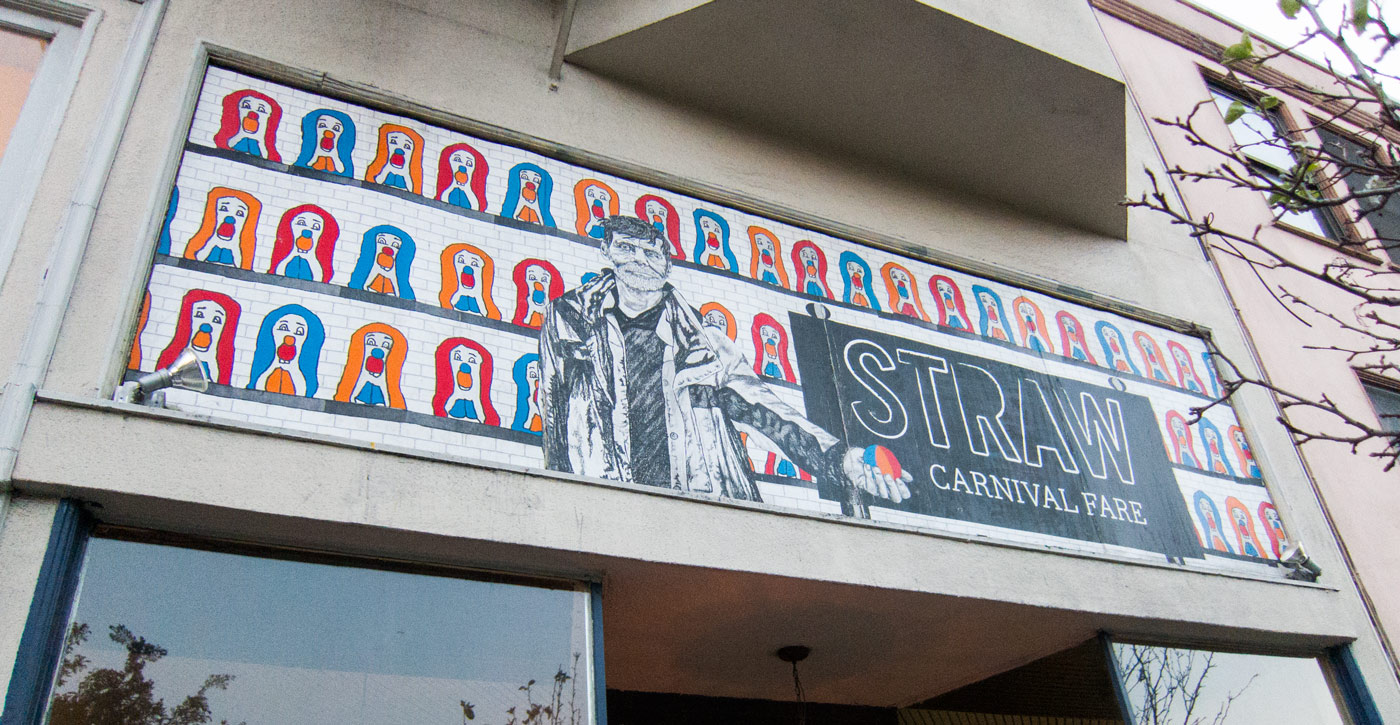 Fate works in strange ways. Every week I drive across the city to get to the Bay Bridge. Always in the left lane going across Octavia, not paying much attention to whats passing by. But recently I glanced over and saw a wonderful site. A tilt-a-whirl seat in a window of a small restaurant. I glanced up and just barely caught that the place was called Straw Carnival Fare. That was more than enough to pique my interest. Growing up, I was convinced I would design rollercoasters, I had bought Coaster, a floppy disk based rollercoaster building simulator from the Scholastic Reader, and I was set. I later found out that excessive math skills would be needed, and dropped that idea pretty quickly.

But I have always had a love for theme parks, fairs, carnivals, games, all of that stuff. Rides, and corndogs; there is little else I need. I even built the website for the Marin County Fair a few years back. So I called my girlfriend right away and asked her to check it out. Reservations were made, and two weeks later we were there with 2 friends of ours. 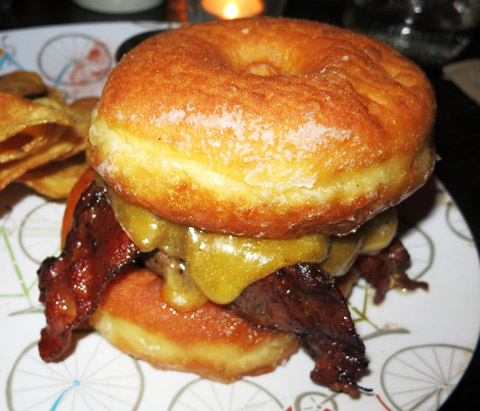 The Ringmaster. I have heard about burgers like this before, but it was only from a chain, and maybe only a combination of food from one chain with food from another chain. But when served up at a proper restaurant, it just seems much better.

What is the ringmaster exactly? A cheeseburger (that I obviously got with bacon) served on two glazed donuts. Many words can be used to describe this. Some would say “that’s so American” or “Gluttony”, but those people are annoying and should not be here. I would say Awesome and Must-try. There was a lot of anticipation for eating this, as we had made plans a few weeks ahead, so it had been lingering around in my mind for awhile.

I was definitely wary of how this would actually taste, as some things that are both awesome don’t always work together (i.e. those bacon chocolate bars). But first bite in, and you could just tell it worked. The sweet and savory was balanced just right.

The burger was very simple; bacon, cheese and meat, which has to be deliberate. The only thing that bothered me was having some of the grease end up on the donut buns, but the burger was really not that greasy. I don’t know how often I would describe something as being fun to eat, but this definitely was.

Recently, if you are getting a burger that is way out of the ordinary, it’s either got some stupid gourmet thing going on like a caviar aioli, or it’s all about how massive this is. The Ringmaster is neither, and it’s one of the most fun things I have eaten in years. On their own, the burger ingredients are tasty with the bacon being done very well. The patty was a really good size, not too thick, and thankfully not too greasy. The donuts were… well donuts. I can’t say I’ve really had a bad one, and these were no different. For buns, they are a bit tall, so you have to do the ole burger squash method to make it work, and you are going to get messy. But this restaurant definitely caters to that. The Ringmaster and a side of homemade chips is $11.75 and it’s another $1.50 for bacon. Pretty standard for an SF restaurant.

For non-burger lovers (ridiculous I know) there are still plenty of options, and some that are close to as interesting as the Ringmaster. A friend order the fried chicken and waffle monte-cristo, and that looked pretty delicious too. Everyone had fun here, and it’s just a great atmosphere for a smaller group of friends. Straw is very small, so it’s best to make a reservation, but I can’t recommend this place enough if you can’t decide between a nice dinner out and a burger place. I’d say the Ringmaster, or an equivalent, is something all burger lovers must try at least once!

Check them out at http://strawsf.com/