Love him or hate him, you all know who Guy Fieri is. Guy has been one of the heavy hitters in the super-celebrifying of the chef, and I am definitely guilty of going out of my way to stop at places featured on Diners, Drive-ins and Dives. My girlfriend’s parents are fans of the show, and enjoy visiting featured places when they are traveling as well. So naturally they wanted to check out one of Guy’s own restaurants when they came up to visit.

So up north, beyond the outskirts of the Bay Area, is Johnny Garlic’s. It’s called a pasta grill, but the dishes are pretty all over the place, especially for its location. The menu has something for everyone on it, including vegetarians and generally picky eaters. But then it also has bison burgers, and some exotic animal as the Hunter’s Special. I’ve actually been a few times, and had things like the pizza, and everything has been pretty tasty. The bread they bring out is always a huge hit too. But that is not why we are here. We are here for this. 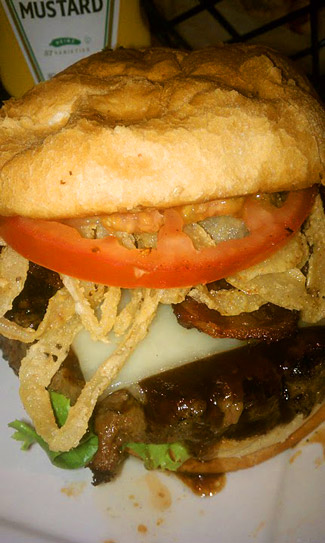 Checking their website and menu now, it looks like this burger has been updated. I had the Snake River BBQ Burger, but now it appears to have been replaced by Guy’s Big Bite Burger. They have added a pretzel roll (one of my personal favorites), and swapped the pepper-jack for cheddar. The BBQ burger was really good. Should this be surprising or not, I don’t know, but it really was solid. The bacon is thick and crispy, breaking apart cleanly with each bite. There’s some onion straws on top for some added crunch, though not overwhelming. The bun was actually really good, with a little bit of crunch to it. Almost a bummer that they went to a pretzel bun, when their regular buns were already rather good, and so many other places would benefit much more from it. What really pulled this burger together though was the BBQ sauce. Definitely a top notch and delicious sauce. It was sweet enough where it balanced the kick of the pepper-jack and brought the whole thing together. They use higher quality ingredients, and its definitely noticeable. 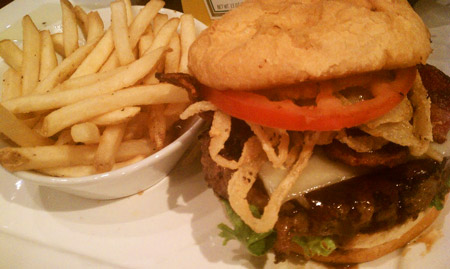 This messy burger caught me off guard, as it was a bit better than I was really expecting. I figured it would be good, albeit standard, but everything worked really well together. It’s a bit higher priced at 13.95 with a side of fries, but that is most likely a balance of local meat and a sprinkle of unicorn dust for that bbq sauce. As a whole, the restaurant is a good place for friends or family; it’s a little loud, there are tv’s up, and the waitstaff is pretty consistently great. The onion rolls they serve with oil and vinegar get devoured plate after plate, and if you can survive for dessert they have some pretty decadent options as well. Prices seem a couple dollars too high on some items, but it is good food and a good time.

You can get more info at http://www.johnnygarlics.com/