Usually I like to give a little background and talk about the restaurant before really getting into my own opinion, but with Sylvester’s I just can’t do that. I have to say Sylvester’s is why this website exists, and it is what set in stone what a great burger and burger place should be. 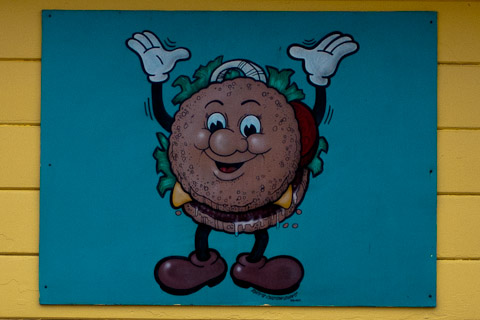 Sylvester’s is a ten to fifteen minute drive outside of San Luis Obispo, a medium sized college town where I spent my academic career. With that being the case, it seemed to take at least 1 or 2 years until you heard about Sylvester’s. They are tucked away a few blocks off the main road that runs through Los Osos, so you really just have to know about it beforehand. But word spreads fast, and once someone who knows someone you know has had Sylvester’s, you’ll hear about it.

I instantly fell in love with Sylvester’s. It was a small burger shack kind of place, but they have recently opened it up a bit more and have also redone the outer patios. It also used to be cash only, but that too is no longer the case. The menu has a lot of options for burger style, and you can swap out the patty for chicken, veggie, grass-fed Hearst Beef and even buffalo or elk. Burger’s come in the 1/3 and 1/2 pound variety. 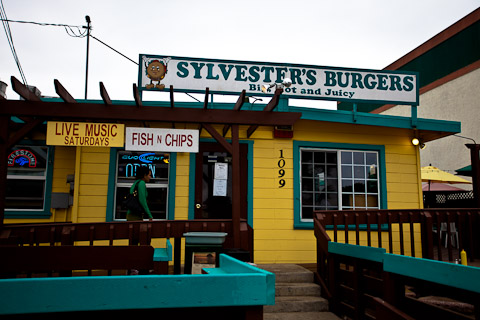 As for pricing, it feels like a shock for anyone from the Bay Area or Los Angeles. Almost every 1/2 pound burger is under $7. I went with a 1/2 pound Desperado burger – bacon, Pepper Jack and BBQ sauce and it was only $6.95. We also ordered onion rings, which are $3.65 for a half pound. 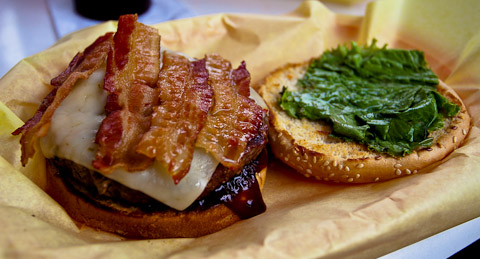 I have a few friends who were my Sylvester’s buddies, and between all of us the Desperado was almost always ordered. I may have ordered the Hana Hawaiian burger once, but every other time I’ve gone western. The second most popular I believe is the Mushroom Swiss burger, but the Desperado is just a beautiful thing. And upon receiving mine, I threw on some of the onion rings for the perfect burger. 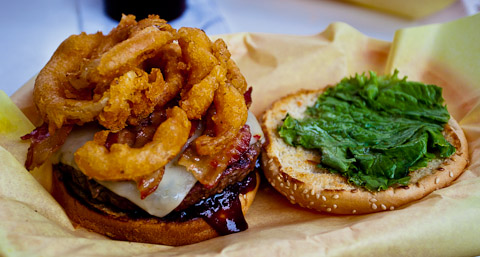 One of the nice things about these burgers is their diameter is pretty large. Personally, I am not a fan of real thick patties, I like the balance of a standard patty thickness with the rest of the ingredients, so if it’s gonna be big either go double patty or spread it out more. Sylvester’s just has that perfect melding of every ingredient, everything is working together to make it great. The bacon is crispy, and snaps cleanly when eating so you don’t have to go messing with the structure of the burger. This is a very good thing, because when they say “Big, Hot N’ Juicy” they really mean it. Not only are the patties juicy, but every burger and sandwich is extremely messy. The Desperado oozes its delicious BBQ sauce everywhere, perfect for dipping when you are trying to finish off the fries. And just about every other sandwich and burger also acts the same, but unlike fast food chains its not mayo thats dripping everywhere, it’s one of their many delicious sauces. Be prepared. The photo below is the aftermath of a 4 person lunch, with an order of fries and onion rings. The napkin death toll was probably around the 25 mark, and I was still rather sticky. 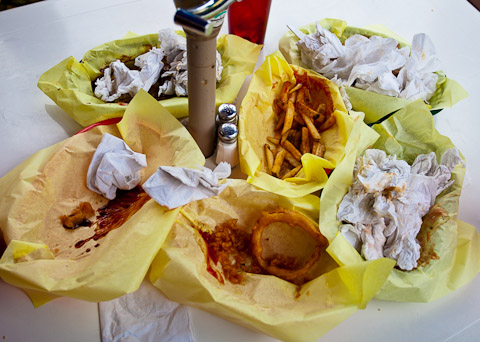 For anyone who’s read the page on my Burger Beliefs, this is exactly where the “Don’t put it down once you pick it up” rule comes into play. You try and put one of these down and it just is not going to work out for you. As I’ve gotten older, I am more likely to leave a bit behind or eat it slowly, especially at a 1/2 pound, but this burger got annihilated. I looked up and my partner in crime (and also the one who introduced me to Sylvester’s) was already working on his fries with just a puddle of barbecue sauce remaining on his tray. His wife and my girlfriend also made quick work of theirs, but our basket of fries and onion rings proved too much for the group. The conversation again returned, as silence had come with the arrival of our food. A obvious sign of how good the food is is how quiet the group is when they are eating it.

When I think of a burger place, I think of Sylvester’s. And any other burger place I’ve gone to since will be compared to it. One of my close friends who is also a burger fiend took his brother their once. Now he drives an extra burger back from San Luis Obispo to Los Angeles for his brother. It is just that good. So it is a bit of a trip to get here unless you live in the central coast, but take a nice weekend off in San Luis Obispo, go visit Montaña de Oro State Park in Los Osos, and then have an amazing burger. There is not much better in life than that.

Learn more about them at:
http://www.sylvestersburgers.com