A weekend excursion driving around Muir Woods left us hungry and without a clue where to eat. We ended up right at the Buckeye, so decided to go for a little nicer dinner. The Buckeye has been around since the 30’s, yet I can’t ever recall going there. Maybe once growing up, but I wrote it off for being a boring place where adults just talked about nothing important all night.

At least that kinda fits the bill now. We were seated upstairs, and the place was loud. Like really loud, in every part of the restaurant. But we received the special table, tucked in a little alcove, adjacent to the largest party. 14 or so middle aged people, one upping each other and talking about their friends with a few properties here or there. Blah. We literally butted up right against them, as
some people would come to talk to the people nearest us, and actually stick their butts on our table.
Wonderful. So much for having a nicer dinner with my girlfriend.

Already a little perturbed, I didn’t feel like getting something fancy on the menu, so I went with the 1/2 pound ground angus burger. $15, with cheese and fries and the normal fixings. Definitely up there in price. 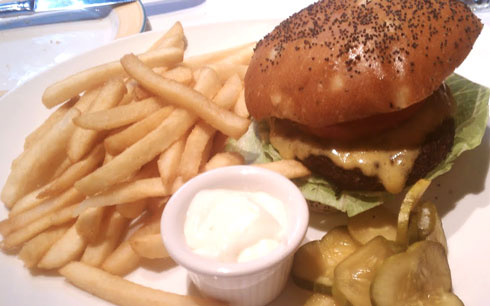 And as somewhat expected, it seemed to be an “out” burger; an option for people who want something cheaper-ish or don’t know what to order. The patty ranged from really thick to normal size, and the taste of how it was cooked varied pretty strongly in each part. The cheese was, well, just cheese. It didn’t stand out from the rest of the ingredients, and was just generally bland. I am not a poppy seed fan, though they didn’t interfere too much. The bun itself was also just so so, nothing like the bread they served before dinner which was delicious. The fries were standard, but tasty.

No real surprise here. While not bad, it definitely was not very exciting or inspired. The more I ate of it, the less I wanted, and ended up leaving more than a couple bites. Worth a stop? Maybe, just not for the burger. They had a smore pie that was pretty interesting and tasty, and the service was good. We actually got the dessert for free, and 50% off our food, which was really nice. We didn’t say a word, but he knew it was pretty bad at our

table. So that was a real nice gesture, but didn’t help the burger out any.

Check out their menu at:
http://www.buckeyeroadhouse.com/