Seeing as my flight got delayed, it seems appropriate that I type this up now.

Being hungry at the airport can be scary, for both your wallet and your internal organs. My flight today is out of the brand new terminal 2 here that they were espousing as some sort of wonderland. Turns out that is the wonderland of waiting. Power sources abound, but that is it for the excitement. We were supposed to be meeting up with family in Seattle for dinner, but with the delayed flight I decided to go with a burger from Burger Joint.

The name sounds familiar, but I don’t quite know why, besides for it being super generic. Have I ever been to one? Is that their rational; that you can’t remember if you’ve had it or not? Are they only in airports? Will I instantly regret this?

At this point, I wasn’t even going to bother to look up more information on them, as I am already irritated at the airport. Gave it a shot anyway, and all their website shows is their logo and “new website coming soon”. I guess it is still 1999.

That means we as a group will not be getting any answers. Now to the actual food. With tax, a cheeseburger came out to just under $11 and comes with fries. Though mind you this is at the airport, where everything we’ve learned about numbers-money and time, don’t exist in the same way as the outside world. I wonder if calculators have issues here too… 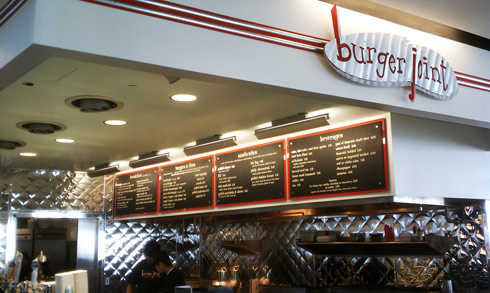 First thoughts. One giant piece of lettuce. Ultra thick steak fries. Suspiciously familiar looking patty. I went for a fry first, as I reached for the ketchup. Mistake, as for my entire meal was spent trying to figure out what the aftertaste of the fries reminded me of (and yes I am ending this sentence with “of”). At this very moment, it still befuddles me. The leafy part of a strawberry that you shouldn’t eat? That multicolored insulation that looks like lint? Those edible photos they put on top of cakes? I really haven’t a clue, but there was some bizarre aftertaste making an appearance on those fries. 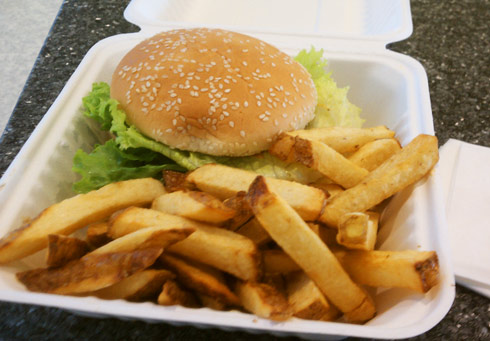 Now onto the actual burger. I said it seemed familiar, and I think I’ve at least got that figured out. Those large stacks of frozen patties you get at Costco that always get cooked by someone you don’t know no matter how small the party you are at is… Yeah, it was just like that. Oh it looks big, but the whole time you are eating, it seems like very little is happening. I read some mumbo jumbo about where the meat was from, but stopped caring. The consistency of the patty just was not there, it had some weird crunchier parts that no one likes to think or talk about. The cheese was fine, but this was a grade A blandburger. Nothing terribly wrong with it, just tasted like some frozen company picnic burger.

If you are at the airport, maybe you pony up the big bucks for a burger at the Lark Creek Grill here and still risk it, or do what I wish I did and get a bucket sized froyo at pink berry. Other than that I have no real takeaways here, except an oddly sore throat and a stomach that I hope doesn’t turn on me.